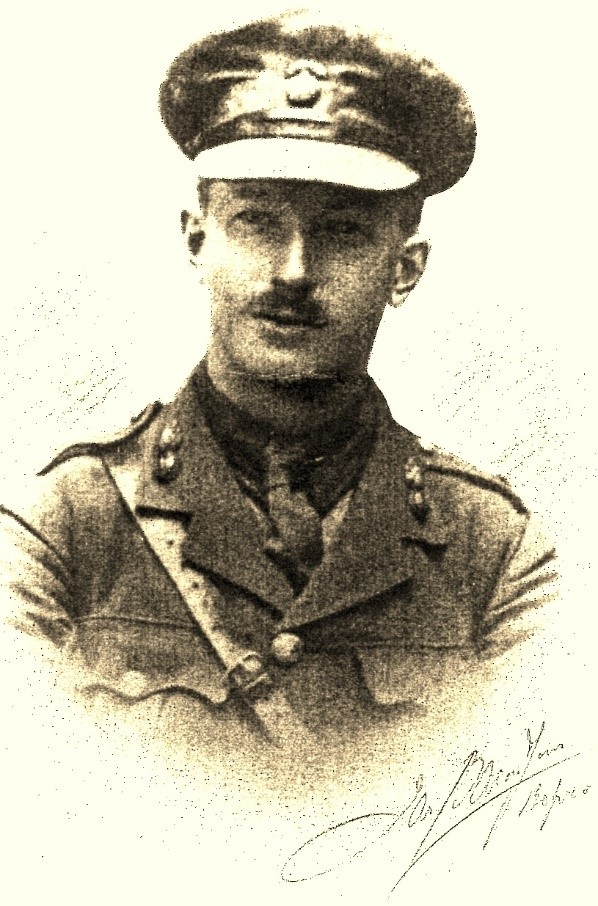 Family History research is a fascinating topic. We are a team of specialist historical researchers with expertise in researching family history. We present our research in bespoke illustrated, recycled card folders with individual pages so you can build your family history in small steps. Discovering Heritage also produces individually designed family trees and individual ancestor profiles.

We have been researching the story of Robert Whitfield Falconer who lost his life in France in the First World War. This family history research arose through our interest in our local community, the suburb of Gosforth, Newcastle upon Tyne. Although not strictly a piece of family history research this appraisal demonstrates the volume and detail of information that can be discovered about a family member within a relatively short period of time. Robert’s memory lives on through his generous posthumous gift of two bells to Gosforth All Saints Parish Church.

‘To The Glory of God and in the memory of Lieut. Robert Whitfield Falconer, 16th Northumberland Fusiliers, one of the original bellringers of this church who fell at Thiepval, France, 1 July 1916, aged 31 years. In his will, he made provision for two new bells to be added to the existing peal in the tower’.

The family history of Robert Falconer is not widely known. Robert Whitfield Falconer was born in Gosforth and baptised at St. Nicholas church on 29 March 1885. He was the son of James William, a clerk, and Isabella Falconer. The family had strong links to St. Nicholas Church which at the time of Robert’s baptism was the only Anglican church in Gosforth. Robert’s parents James William Falconer and Isabella Nixon were married there in 1884. At the time of Robert’s baptism, the family were living at 29 High Street, Gosforth.

In 1890 there was an addition to the family with the birth of Robert’s sister, Mary Isabella. By 1891 the family were living at 38 Ivy Road, Gosforth with a female live-in servant. When tracking the family through the census we found, by 1901 the family had moved to 4 Linden Terrace, Gosforth, (a misrecording of Linden Road), again sharing their home with a female servant.

Directories are regularly produced printed lists of businesses and residents produced on a countywide basis. Using trade directories it has been possible to discover something about James’ employment history. His place of employment throughout the 1890s was J.G. Charlton & Company, shipbrokers, of Cails Buildings, Newcastle. The first reference to his own shipbroking business, Falconer, Ross & Company based in Sandhill, Newcastle, can be found in Ward’s Directory of 1906.

The New Parish Of Gosforth

The new parish of Gosforth All Saints was established in 1906 and the Falconer family appear to have worshipped there from that point. James William Falconer, Robert’s father, served as a member of the parish vestry from 1906-1917. For some of this time he served as People’s Warden. Robert Falconer was a keen bell-ringer.

The All Saints parish magazines include numerous references to bellringing including some specific references to Robert. As an example, an article of August 1913 records a quarter-peal of triple bells being rung to mark the departure of one of the ringers. Mr A.M.C. Field, was leaving for South America. It records Robert as one of the ringers. Robert was an active bell ringer.

We know from the Annual Report of Durham and Newcastle Association of Change Ringers that in 1913 he rang at churches in Gateshead and Whitley Bay as well as Gosforth.

The memorial plaque in All Saints Church records that Robert Falconer served in the 16th Battalion of the Northumberland Fusiliers. The Battalion was raised in Newcastle in September 1914 by the Gateshead and Newcastle Chamber of Commerce. It is likely that Robert served with friends and professional colleagues.

This Battalion was one of twelve Pals Battalions raised by the Northumberland Fusiliers. Pals battalions were made up of groups of colleagues, friends and neighbours many of whom were acquainted with each other. The already close relationships that existed amongst the recruits was believed to increase camaraderie.

The downside of this form of recruitment was that when large-scale losses began to take place the male population of some families and communities were decimated. In November 1915 the Battalion began service in France. Robert Falconer lost his life on 1 July 1916, the first day of the Battle of The Somme. Five fellow officers also lost their lives with over three hundred and fifty men.

Last Will And Testament

On 3 September 1915, just two months before the 16th Battalion began their service in France, Robert signed his will. The executors were his father and John Frederick Bird, a friend and fellow bell-ringer. The beneficiaries of the will were the two executors, John Bird’s infant son and Robert’s sister, Mary. One clause of the will related explicitly to his wish to endow two bells at All Saints church :

Robert’s father ensured that his wish was met. Two bells were dedicated to his memory by Bishop Wild on 3 October 1920.

The Peel of Bells

Extract from the Annual Report of Durham and Newcastle Association of Change Ringers, 1920, reporting on presentation of the bells to All Saints Parish Church, Gosforth.

Robert Falconer is remembered on the Thiepval War Memorial. His full-service record can be accessed at The National Archives, Kew, London. The record provides a full account of Robert’s service from the date that he signed up until his death. Today bell practice in All Saints Parish Church takes place on a Monday evening. Ringing for services takes place on Sundays when the peel of bells ring out over the Gosforth community.

Find out more in our Etsy Sore!

More on our Family Histories

Just Another Century
Starting in 1875 the plot revolves around …
Joe Fisher Family Story
Following David's last post when we discovered …
A Real Diamond Geezer
The son of  Jacques Fisher and Sybil Jacobs …
The Laidlaw Family of Brush Makers
David Wardell follows the Laidlaw family through …
The Remarkable Life of One Gosforth Woman
One of history's dilemmas is that it …
Category: Family History
Tags: Family Folio, Family History, Family Story, Genealogy

Following on from our article about Robert Falconer we’d like to share some tips about researching British Army soldiers who served in the first World War. ©Discovering Heritage

Other Sites That May Help With Your Research

Gifts inspired by the archives!

Was your house famous? We can search through hundreds of archives to bring you News Sheet Legacy posters highlighting the article that mentions your house.

Dr. Gibb is immortalised in lines of the famous Geordie song ‘Blaydon Races’:

Dr Charles John Gibb was born in Newcastle in 1824, son of Joseph Gibb, a surgeon, who practised in the Ouseburn area of Newcastle for about forty years. After completing his school education Charles Gibb was apprenticed to Mr. Common, resident surgeon at Gateshead Dispensary. He completed his apprenticeship at Newcastle Infirmary. Dr. Gibb then furthered his studies at medical schools in Edinburgh, London, Vienna and Paris. He then returned to Newcastle to take up the post of house surgeon at Newcastle Infirmary, then at Forth Banks. He then went into private practice as well as lecturing at Newcastle School of Medicine and Surgery, then part of Durham University.

Dr. Gibb lived at 52-54 Westgate Road, Newcastle, from about 1861. The property now known as Gibb Chambers is marked by a black plaque. By 1891 Dr. Gibb and his family had moved to Sandyford Park, Jesmond. The property originally known as Villa Real was designed by architect John Dobson. It was re-named Sandyford Hall, later Park, by Dr. Gibb. The house today forms part of the buildings used by Newcastle School For Girls.

Discovering Heritage mission – to discover, share and re-tell stories that enhance peoples association with their houses and communities through recognition of the history.

We have come across an interesting entry in local records which attends to the moral character of Charles Gibb. On November 16th 1871 the Directors of the North Eastern Railway compensated Dr Gibb 100 guineas. Dr Gibb had sustained an injury in a railway collision at Brockley Whins. Charles Gibb donated the money equally between 10 local institutions including Deaf and Dumb, Industrious Blind, Idiots and Imebeciles and the National Lifeboat Institution.

In our possession we have a number of photographs relating to the Gibb family and Sandyford Park. The first is a photograph of Frances, wife of Dr. Gibb. Charles Gibb married Frances Elizabeth Gilbert Galaher in 1866. The couple went on to have four children. This image thought to have been taken in the 1890s shows Mrs. Gibb in formal dress. Her dress, fan and jewellery all reflect the status of the family.

The status of the family was also reflected in the size of their household. This photograph, again believed to have been taken in the 1890s, shows the household staff. The 1891 census records a lady’s companion, a nurse, a cook, two housemaids and a page living with the family. Living in adjacent properties were three gardening staff and a coachman.

The third of the photographs is an internal view of the Sandyford Park property. The room is decorated in high Victorian style as befitted a family of means and status.

This is a real treasure of a post. Photographs that have survived from the 1800s are few and far between. The Gibb photographs give us a tantalising glimpse into the life of this well respected and eminent physician.

We thought it appropriate to end as we began with a reference to the Blaydon Races Geordie anthem. We have chosen this particular video because it commemorates another well respected and much loved Newcastle man, Sir Bobby Robson. This year is the 10th anniversary of Sir Bobby Robson Foundation.

We enjoyed watching this video we hope you do too!

For extraordinary gifts from the archives visit our Little Histories Shop

Discovering heritage through the authentic historical research of people property and places.