Welcome to the third and final post in David Wardell’s series remembering the traders who came round our doors and streets in the nineteen fifties and sixties. In this article we are reminded of life before MacDonald’s and tempura king prawns when people used to save their old newspapers and take them along to the local fish and chip shop to be used for wrapping. Who else remembers waiting for the chime of the ice cream van or even earlier the whistle of the Walls ice cream cart? We begin with the fish man and fishwives who came from the coast to sell their fresh fish.

Once a week the fish man would call by the street with his little van. Collecting his fish from North Shields he was a popular caller with his small range of very fresh fish, locally smoked kippers, rollmop baked herrings and fishcakes . We would also often use the services of the two Cullercoats Fishwives who came up from the Coast on the Electric Railway to sell their locally caught produce. Many older residents will remember Lily Scott Finlay who stood for many years at South Gosforth station and later Lily Scott Finlay at South Gosforth at the bottom of the Grove or just opposite, outside St.Nicholas Church,  and Bessie Brown who favoured Moor Road,  later moving to the corner of Church Road and Harley Tce,.  They would cheerfully fillet their fish, barely watching what they were doing whilst chatting away profusely with their customers and tossing their fishy waste in to the base of their barrows. They knew all their customers well since  many were regulars who often left orders with them for the following week. 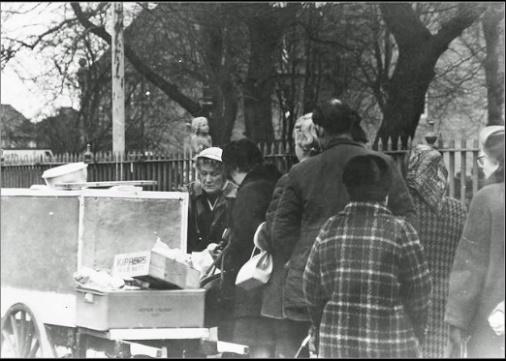 Catch up with other posts in this series

In the early 50’s  Mr.Whippy was still a dream idea and ice cream sellers would come round the streets with their handcarts or small carts combined with a bicycle. Ice cream was kept frozen with the use of dry ice which was frozen carbon dioxide or in some cases the carts had rechargeable fridges.  Commonly it would be the Wall’s ice cream man who would have rectangular blocks of ice cream and lollies to sell. Cornets were square to take these slabs which also fitted nicely inside a pair of wafers.

These men were replaced a little later in the 60’s with Mr.Whippy and other branded  soft ice cream vans who would offer their new soft product whilst boldly  announcing their presence with the now very familiar sound of their chimes,  loudly playing ‘Greensleeves’ . This would soon attract kids like the Pied Piper, from all around, having pestered their Mothers for money to buy a cornet or lolly. The tune is now almost synonymous with ice cream vans. Small people soon had the difficult choice to make as to whether they wanted a 99 flake , dragon’s blood or sprinkles on their cones, not to forget the crispy, slightly dearer sugar cone option.

The butcher’s boy was one more iconic caller to our streets.  His bike would have a large basket on the front for orders and often an advertising panel beneath the cross bar. He would very often be a man rather than a boy and would travel round with his newspaper wrapped parcels of meat and sausages. Many shops were still quite happy to arrange deliveries at that time. Grocers would often dop off boxes of ordered groceries. Ours came from a grocer who had been in the Grainger Market for donkey’s  years and had delivered regularly to my Grandmother’s family before us.

Essential for us all in those days, with belching chimneys fom our coal fires (no central heating then) was the chimney sweep.  Earlier sweeps had cycled round with their brushes on bicycles but by the 50’s they were travelling about in their little vans.  They would arrive with their rods and brushes and large thick dust sheets within which they trapped the soot. They would push their brushes up the chimney until the assistant noticed the brush sticking out of the chimney pot.

Occasionally if a chimney had become ‘difficult’ to pass the brush up they would climb on the roof and dop a large heavy ball down the chimney to clear any obstruction.

This was still early days and they hadn’t given way to the industrial vacuum cleaners that made the work a little cleaner in operation. Very easily identifiable by their very black, sooty hands and faces , it was considered lucky by many to have a chimney sweep at their wedding. A useful extra source of income for them.

Once a year small boys would ring our doorbells squeakily announcing themselves with the words ‘Bob a job  ’ This was the efforts of the local scout troop to raise funds where the scouts would carry out simple household jobs like a bit of shopping or maybe washing a car or a bit of weeding,   in return for a shilling (a ‘bob’ …now equal to 5p) .

Other young visitors would come during the run up to Guy Fawkes night when groups of kids would call with their ‘guy’ that they had made, sometimes in an old pushchair or on a soap box cart with the cry of ‘ penny for the guy’.  Halloween had yet to make an impact on Britain at this time but we children would usually hollow out a large turnip, cutting a face through , with a candle inside.  The  ‘trick or treat’ phrase had yet to make itself known so we would just roam around with our lanterns looking for witches. More commonly these turnip lanterns were made for Guy Fawkes Night just a few days later.  The rather pleasing smell of the burning turnip is very memorable and evocative of that period and never forgotten.

Christmas of course brought out the groups of carol singers and occasionally just a single very brave child on his or her own. Singing stopped immediately they got their money so if you wanted a bit more of a tune it was best not to rush with your payment.

The Fish And Chip Van

Not seen in our street but a popular vendor in some parts was the Fish and Chip van. We tended to rely on the well established local shop of Bob Young’s on Gosforth High Street but some residents living  further away from the high street were happy to see these vans that would regularly call and station themselves once a week. I recall one who used to stand by Regent Farm Road shops. Many were in converted buses , large old vans or modified ice cream vans. Of course chip shops always wrapped your food in newspaper and not fancy boxes like today. Not so hygienic perhaps but nothing tasted better than fish and chips out of a newspaper dripping slightly with watered down vinegar and salt, and of course, grease.  Never tomato ketchup from the chippy unless you bought a tiny bottle from them !    This was early recycling and we would keep all our newspapers till a pile built up and then take them to the chip shop or perhaps the butcher or fishmonger. It was quite some time before some bright spark  realised that perhaps this was not the most  hygienic wrapping for food and they started using plain, unprinted paper.

The street sweeper was another common sight.  With his two square bins fixed on a single axle he would push this round the streets all day. He would have his broom standing upright on the front or sometimes fixed along the side coupled with a shovel and his iron  ’rake’ . The latter tool was used to rake out the accumulated dirt in the metal channels set in the pavement leading from house gardens to the roadside gutter.  Most of these lone sweepers would take pride in keeping their group of streets spotless. Now long since superseded by small motorised vehicles , both on the road and footpath although the latter sadly mostly absent for some time due to council cut backs.

Coupled to these sweepers were of course the ‘gulley tank’ wagons.  A  large lorry -vaccuum cleaner and tank used to suck out the accumulated dirt and leaves gathered in the roadside drains and help to prevent flooding if they became blocked,  followed by a good sluicing with a milky white disinfectant solution.

No doubt there ae many other visitors / workers that I have yet to mention but the above represent the main body of those that I recall from this era. © David Wardell