In Come The Greyhounds

Welcome to the second part of the history of Gosforth Asda Site. In part one David Wardell took us back to the very beginning and the development of this site as a cycle racing track. Catch up with the beginning of the story here The History Of The Gosforth Aada Site Part One

Greyhound racing arrived at Gosforth County Ground from 1932 following the revamping of the existing County Athletic Ground. The athletic ground had been in use since 1900 as the Gosforth Cycling Grounds but when greyhound racing plans were passed it underwent major re-construction. The Gosforth Stadium Greyhound Racing Company Ltd was set up with directors John Moffatt and Walter.J.Freer ACRA, [a corporate accountant practising in Chester-le-Street as “Parker and Freer” ]

Walter was an extremely gregarious person. His wife Elizabeth (Liz) had been one of my mother’s best friends at school.  They were my adoptive Uncle & Aunt. I rarely saw Walter who I recall as of medium height and a stocky build but Liz visited my Mother almost weekly .  I recall once being taken out with Walter, Liz and their nephew & niece to The Shallows restaurant in Newcastle. Not content with their menu Walter called the waiter over and instructed him to supply a large quantity of mixed grill on a big oval silver platter. It arrive with a huge amount of lamb chops, steak, gammon, chicken, sausages and other items + dishes of fries and other vegetables. To a young boy of 12 this was enormous and outside of the world I was used to.

Walter, I believe, had two daughters by his earlier marriage and he and Liz also had a son together – Roger Freer who was well known in Newcastle. Roger trained as a veterinary surgeon and lived at Hexham in a large Hall of a house, he became interested in antiques and will be remembered for his Antique Shops in Shakespeare Street and within Fenwicks Store as well as another shop at Hexham.”

Back To The Gosforth Greyhounds

The foundations of the speedway track made it easy to lay the new greyhound track, and soon Gosforth was up and running with its inaugural meeting coming on the 21st of May 1932. Greyhound racing operated under NGRC rules, and the short lived British Greyhound Tracks Control Society (BGTCS). and by 1937 had built up a relationship with it’s new sister track south of Newcastle at Redheugh Park, Gateshead.

The circumference of the track was 456 yards with initial distances of 420 and 520 yards. The narrow track meant that 5 dog races were the norm and a new electric hare was introduced . Covered stands surrounded the entire track by 1939 culminating with two major stands on the home and back straights. The north stand on the back straight included a club enclosure downstairs. The Sports Club was situated between the third and fourth bends and the Stadium Club could be found on the opposite side of the track. A large paddock and resident kennels were set back behind the Stadium Club with further isolation kennels and paddocks not far from the second bend area. The racing kennels were near the first bend next to the Northumberland Rugby Union Pavilion.

The opening night for greyhound racing was on 21 May 1932 . Soon special buses were being put on to bring in the punters.

In the early years of greyhound racing it was often said that it was a dissipate and morally dubious activity, vulnerable to being manipulated by criminal elements, because of the opportunities for malpractice that it offered.

The ‘human tote’ operated during the ‘Tote crisis’ of 1932–34 and seemed to confirm the potential for illegal totes and fraud. However, the facts did not support the general view of the seedy and criminal nature of the greyhound tracks.………there were malpractices but only on a minor scale.. There is little evidence that gangs ran the tracks as had occurred in horse racing in the ‘turf gang wars’ of the early 1920s. It appeared that greyhound racing operated a form of consensual policing.

An attack by a greyhound at Gosforth

A special permit for a Greyhound meeting is issued by the Police after the start of war. 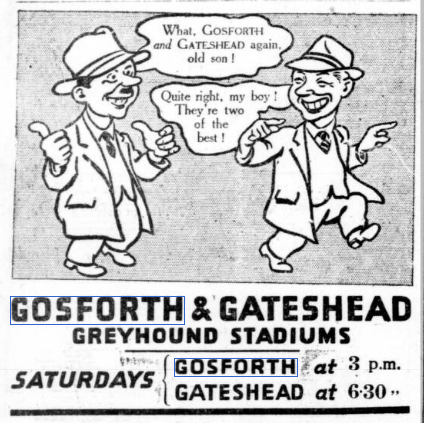 A question was asked in parliament regarding mid-week opening of the stadium. It was refused on grounds of having an adverse effect upon the National Drive for production post WW11, despite thousands of letters and cards signed by people in the area  in favour of this having been received.

Mr. John McKay asked the Secretary of State for the Home Department if he is aware that a large percentage of the people living round about Gosforth are convinced that there would be no adverse effect upon the National Drive for Production if Greyhound Racing at Gosforth Stadium was permitted between the hours of 7 p.m. and 9.30 p.m. on Mondays and between the hours of 10.30 a.m. and 12.30 p.m. on Saturdays; and will he grant permission for this to be done.

The Secretary of State for the Home Department (Mr. Ede) I am aware that a number of residents have signed declarations to this effect, but the information before the Government does not support the view that it would be consistent with the urgent need of maximum production to permit mid-week or Saturday morning meetings in the area, and I regret that I am unable to comply with this request.

The Gosforth Company John Moffatt and Walter Freer  became owners of dogs to enable them to run on tracks where company owned dogs are barred.

During the 1960s the track was acquired by the Totalisators and Greyhound Holdings (T.G.H) who were actively purchasing tracks at the time to increase their portfolio. In 1966 rival track Gateshead closed and in 1974 TGH was bought out by Ladbrokes who persuaded Arthur Aldridge to leave the Greyhound Racing Association (GRA) and take over as racing director. In 1977 a graded greyhound called Gorton Road won her 100th race. One year later in 1978, Paul Richardson took over as Racing Manager at Brough Park and Gosforth. 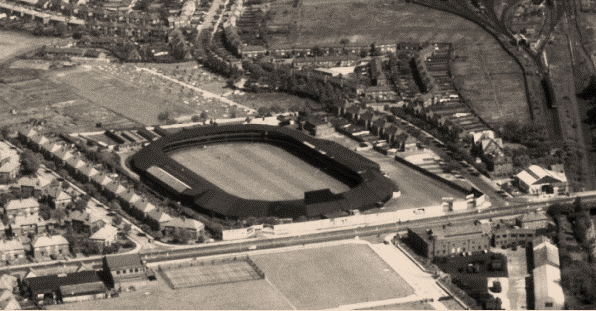 Ladbrokes began to sell off the tracks in their portfolio and with the sale of Brough Park in 1983 the new promoters of Brough Park stopped their trainers from supplying runners to Gosforth, leaving the track under pressure for a supply of runners. The tracks promoter Jim Glass made the decision in 1985 to leave the NGRC and race independently blaming NGRC costs as the reason. It was the beginning of the end for Gosforth before the stadium was finally sold for re-development in 1987. The last meeting was held on 7 August 1987 . 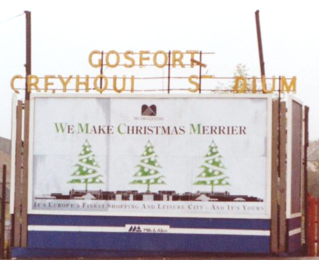 Mention of Gosforth Ground sold to Asda for over two million 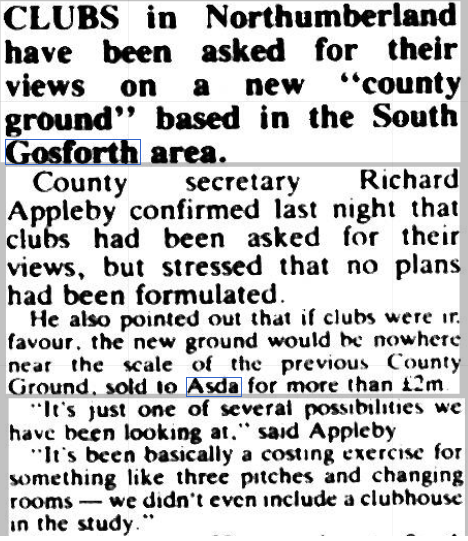 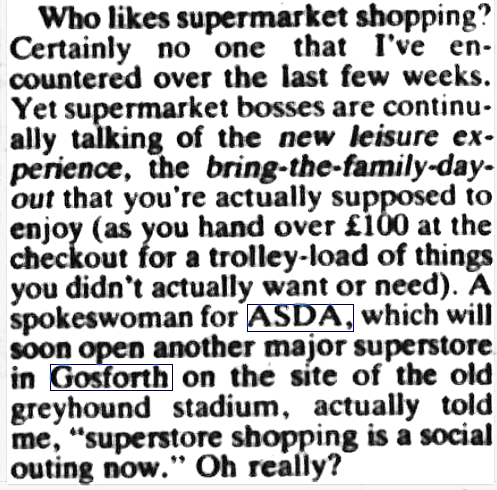 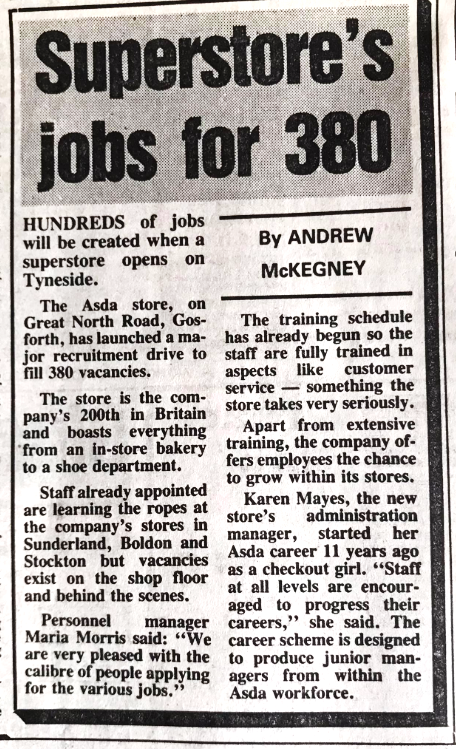 The Journal Apr 1990 Hundreds of new jobs at new Asda 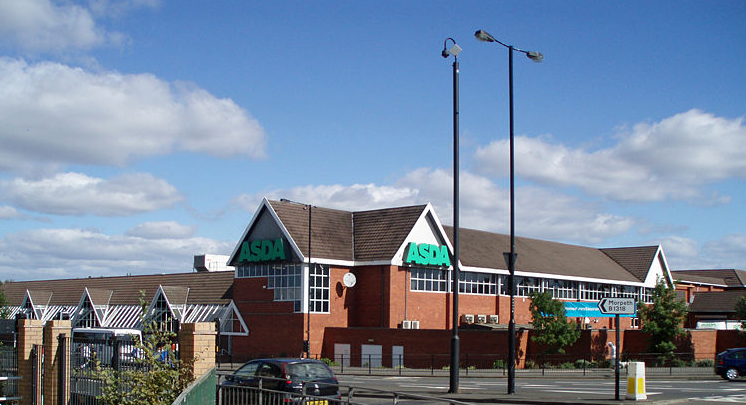 Have you enjoyed reading this article? Why not take a browse through our blog for behind the scenes with our house histories research and the history of Gosforth and Jesmond.

Are you ready to discover the history of your house? According to UNESCO: “Heritage is our legacy from the past, what we live with today, and what we pass on to future generations. Our cultural and natural heritage are both irreplaceable sources of life and inspiration. ” Begin your House History journey today when you request a free archival assessment on your property. ARCHIVAL ASSESSMENT

This is what one customer had to say about her house history pack!

“Blown away by how good it is. Best find all year, such unique gifts. So well presented and wrapped. Made with love and care. You won’t regret ordering.” Read more reviews on our home page.

3 thoughts on “History of The Gosforth Asda Site Part Two”