This month we bring you the story of coal mines and the Illicit still, that became known as Smuggler’s Hole on Nun’s Moor. We look forward to posting local history articles; they provide a different outlook from the house histories we research and the opportunity to immerse ourselves in the broader history of the North East. Today David Wardell shares two interesting stories surrounding Smugglers Hole in Newcastle.

We invite you to travel back to the 19th century and beyond. This story has its roots in the medieval coal mines of Newcastle. Since ancient times, coal has been mined in the North East; it became more widespread during the 13th and 14 centuries. In medieval times coal seams were usually reached by gradual descent from the surface. The abandoned coal mine on Nun’s Moor was an ideal place for the manufacture of illegal alcohol, Newspapers of the time are full of stories of the discovery of illegal stills. Imagine a field beside the graveyard of St Nicholas church cemetery near Fenham Hall on May 1st 1822 and the discovery of a hole leading to an ancient mine.

As reported in various sources, Newcastle Excise Officers were supplied with information by a confederate that led to the discovery on 31st May 1822 , of an illicit distillery inside an old coal mine accessed by a shaft leading down from a field at the side of St.Nicholas’s cemetery near Fenham Hall on Nun’s Moor.

The ancient mine was well screened by scrubby bushes and undergrowth and at the bottom of the shaft, reached by a long gradual descent,  they found a small hole through which they had to crawl to enter.  Past the entrance hole they came upon a large ‘apartment’ in which they found two stills containing around 200 gallons of ‘wash’ and with a complete distilling apparatus considered to be worth about £50.00.  A long brick chimney had been built leading in to the workings of the old pit which was used to convey the smoke from the still.

There were also connections to adjoining pits and coal that still remained unworked  had been used to provide fuel for the still, with a ready supply of water also being available.  A perfect set up for the stills with full supply of all their needs and a high degree of secrecy.

This discovery had first been made by a confederate, and the place later became known as  “Smugglers’ Hole”.  (Subsequently the property of Mr. Richard Wardle) [ See Parson & White Directory 1827   p. 55, and also  “Local Records”   by John Sykes -Google Books ] 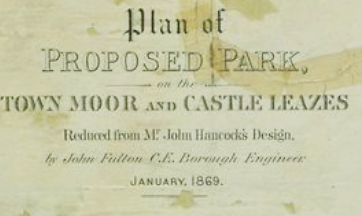 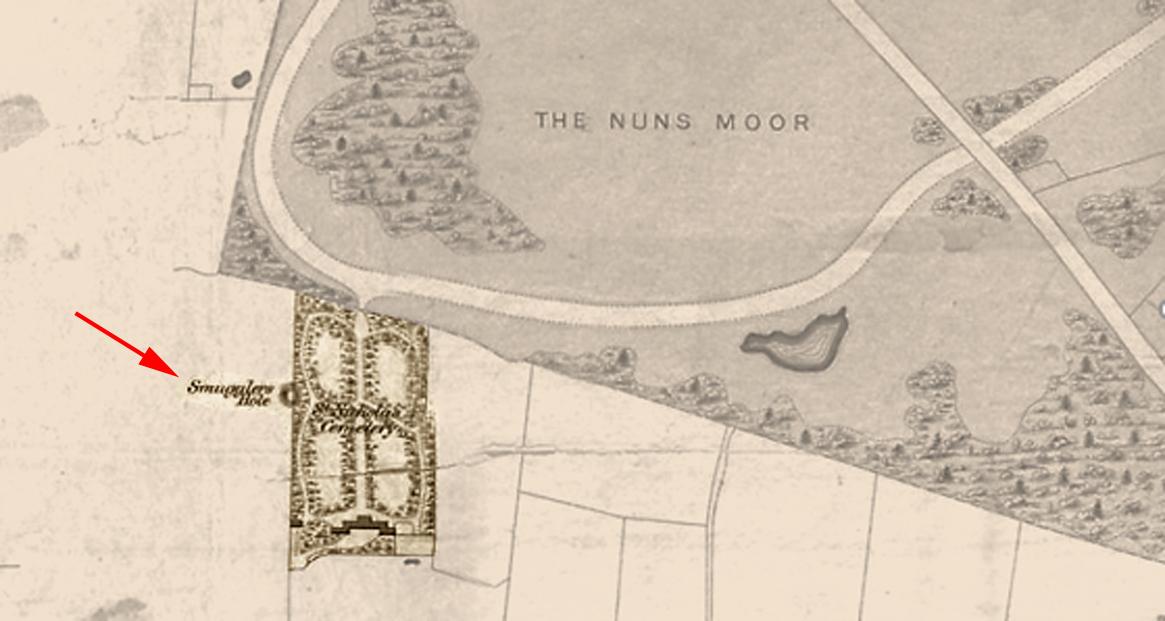 From a proposed plan of Town Moor 1869    Newcastle City Libraries 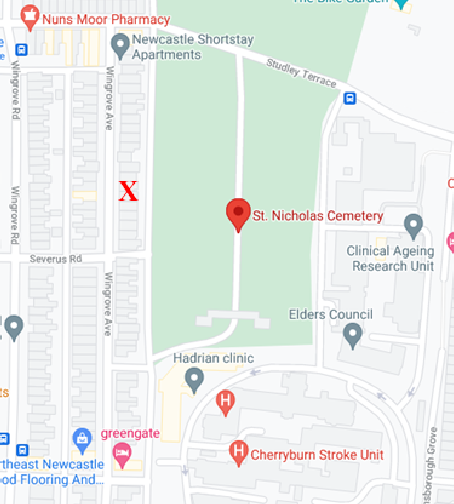 The Smuggler’s Hole (marked with a red X ) would have been sited about half way between Studley Terrace and Severus Road at the rear of Wingrove Avenue , at the back of the Old Newcastle General Hospital.

It is also marked on the older OS maps as “Smugglers Hole” (Alan Godfreys copy of the 1913 OS map covering Arthur’s Hill & Fenham). 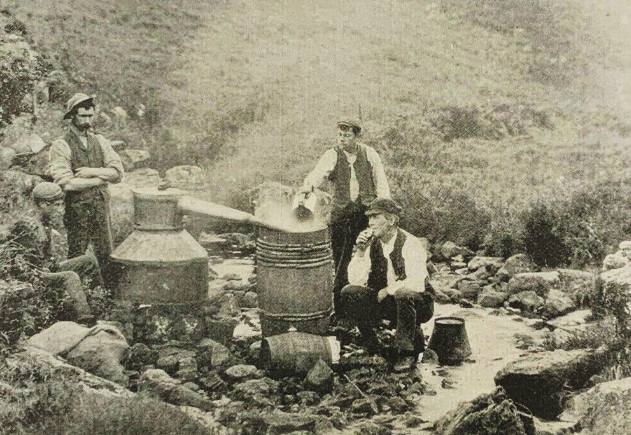 Here’s an interesting extract from John Sykes of 1824

As soon as the discovery was known, hundreds of persons visited the place, many of whom were induced to explore “The Smuggler’s Hole,” as it was now called, and some who ventured into it had to stay much longer than they calculated on. About four o’clock on the morning of the 6th of June, three young men, to gratify their curiosity, ventured in about a mile, it was supposed, from the entrance. They had provided themselves with candles, which they considered sufficient for their purpose; they had, however, proceeded too far, and not having marked their way, were unable to retrace their steps, and their candles being nearly consumed, they were reduced to the necessity of making a fire with a hammer handle (which they had with them for the purpose of knocking off petrifications) and some pieces of coal which they found in the place.

As the day advanced their friends became alarmed for their safety, and about twelve o’clock, some pitmen coming to the place, kindly offered their assistance, and, after some time, found the young men, who had been listening with much anxiety to hear the approach of any deliverer. They had not followed these friendly men afar, when he who carried the candle stumbled, and they were again in total darkness; and such was the difficulty of their situation, that even with these experienced guides, they were obliged to continue in this dreary cavern several hours longer, when other two pitmen proceeded in, and extricated the whole about half-past four o’clock in the afternoon, the young men having been under ground without any food upwards of twelve hours.

The roof and floor of the cavity were covered with very curious petrifications, called stalactites, formed by the drippings of water. Several other persons were liberated by pitmen, so that it became necessary to build up the aperture; but such was the curiosity of the public, that the mason work was soon demolished. 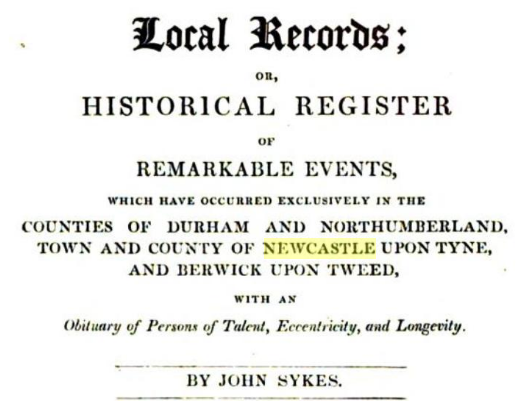 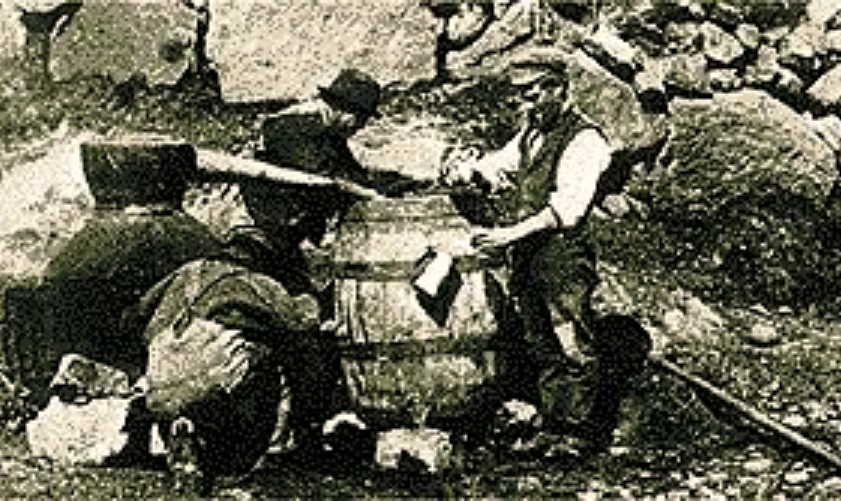 We hope you are enjoying our blog? Here is an excerpt from our own story page – “Our House History mission began over a mug of coffee in the local coffee shop. The seeds to set up a business researching heritage were sown in 2018 on Gosforth High Street in Newcastle. When two friends started to talk about retiring and how much they disliked the idea!” Read on and Meet our team