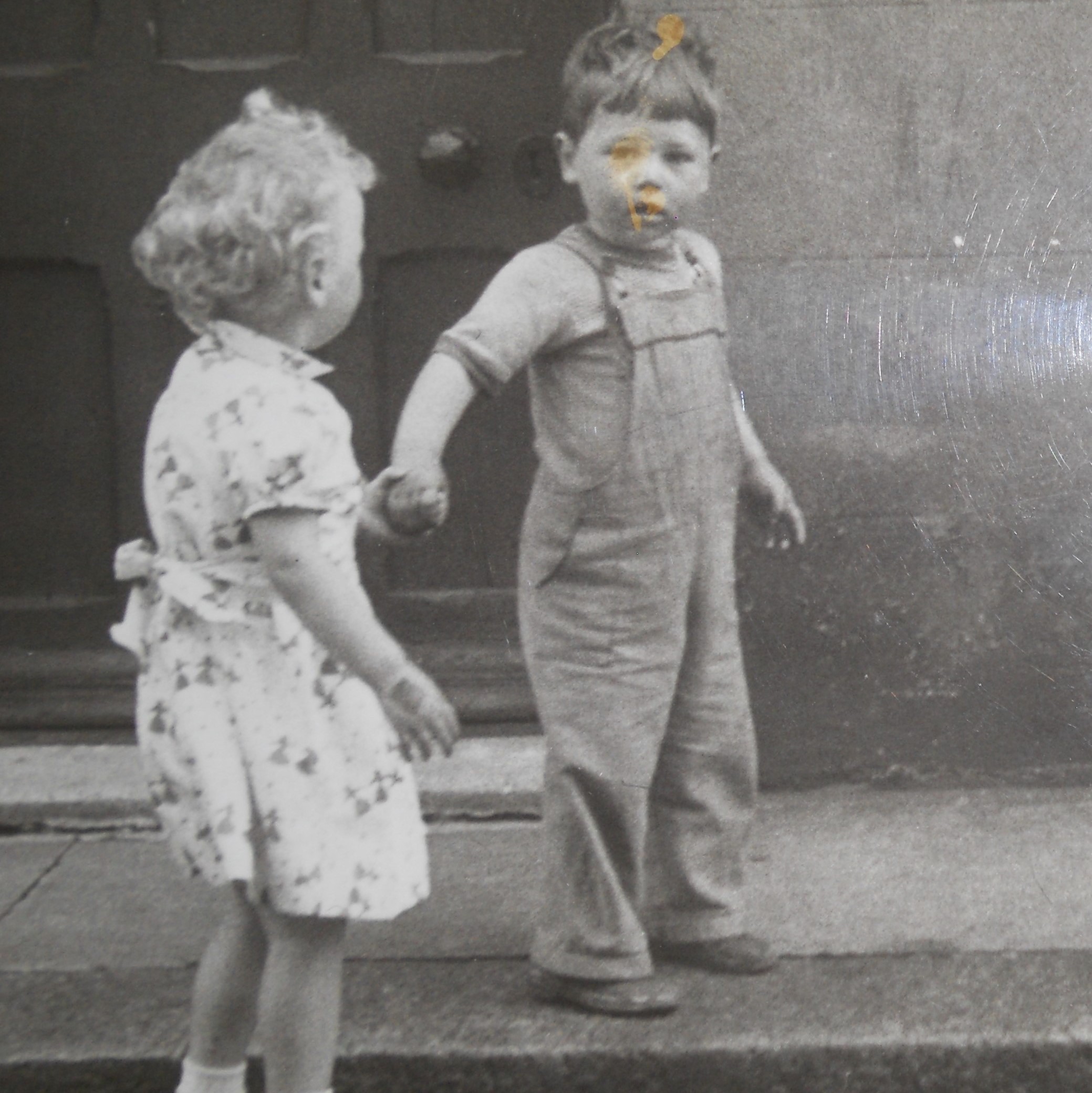 We are pleased to be able to share our second guest post from Jack Harland. Jack gives us a beautifully evocative account of his early years living in one of the lost streets of Gosforth. Ash Street backed on to the colliery railway and lay in the general area of the Gosforth Civic Theatre. We believe the supermarket Jack refers to is at 1 Henry Street, the business currently trading from the premises is Alpha Male Grooming. This post follows on from The Trap – The Social Heart Of Coxlodge

In the first years of the post-war period there was a terrible housing shortage in the United Kingdom.  My father had left the Navy and my parents found a terraced house to rent in Ash Street, Gosforth. Its walls were of soot-blackened brick that was starting to crumble, there was no electricity, bathroom or inside lavatory, but they were lucky to get it.  Like my Grandma’s house in West Street, it was lit by gas mantles and heated by a single coal fire in the sitting room. I spent a lot of time at my Grandma’s house and, humble as it was, it seemed well-furnished and homely compared to Ash Street. My parents were starting from scratch, had nothing and living conditions in their tiny first home were Spartan.

Children and dogs were put out onto the street and allowed to roam in the 1950s.  I was a difficult boy to keep indoors and as soon as I could walk was exploring my local patch.  In summer I was put out in bare feet, (“It’s good for you,” said my mother) and remember the smooth feel of the cobble stones.  My best friend was the girl I’m with in the photo and I went straight to her door in the morning to enquire as to whether she was, “Coming out to play?”

A favourite place was the crisp factory.  There were big doors for lorries on one side and steps up to a side door on another.  We would sit on these steps waiting for the men in overalls to open the door. Lovely cooking smells wafted out and big, hard-working hands reached down to tousle our hair.  We were given a paper bag of crisps to share, with a twist of salt in a little piece of blue, greaseproof paper. They were no ordinary crisps, being either too thickly cut or too well-cooked, but perfect for two growing children who spent their days in the fresh air.

A mutual friend came from a very poor family.  Her clothes were ill-fitting and scruffy, her hair unbrushed and she always needed a good bath.  She would call at our door and my mother would find something for her to eat. In the evening Mam told me that she felt sorry for her while combing my hair with the nit comb, “Just in case.”  This little girl was infected with various parasites and on one memorable occasion needed to sit on the lavatory but couldn’t reach it. A white enamel pail with a blue rim was used instead and we were both thrilled to see the seething mass of worms in the bottom.

The colliery railway ran just at the back of our house and the steam engines stopped there regularly.  I loved everything about them; the chuff, chuff noise as they moved; the unpredictable hissing, accompanied by urgent clouds of steam; the black smoke that puffed from the smoke stack and the glimpsed drivers, hunched over a red glow in the cabin.  When very young, my mother would lift me up beside the line to see this marvel and the driver and fireman would stop for some banter.  My mother had been a pin-up for the RAF and worked as a model in Fenwick’s so it’s easy to understand why the colliery engines stopped there.  On one miraculous, never-forgotten occasion the crew asked if, “the laddie would like a ride to the pit and back?” Big, black arms reached across for me and I was pushed into the warm cabin of the engine.  What an experience that was. I remember the clanking noises, the searing heat when the fire door was opened, the pulling of big levers polished with use and the acrid smell of the coal. I was allowed to pull the hooter when, its trucks full of coal, the engine got back to Ash Street.

On a more prosaic note, I was never much interested in my bowl of Cornflakes at breakfast but I was more than excited by the plastic toy figures found in every packet at that time.  There was a picture of the whole set on the back of the packet and I stared at them, transfixed. Sets included medieval knights and Robin Hood and his Merry Men. When a new packet was opened I was allowed to rummage among the flakes until my little fingers found my treasure.

On one fateful occasion I had most of a set but the last figure eluded me. I thought it an injustice that the one that I had just found I already had. I was disappointed and determined to do something about it. My territory was not a big one and the shop where the Cornflakes were bought had only been visited with my mother, but I knew where it was.  It was an early supermarket, tiny by today’s standards but novel at the time. I think it was on the corner of the road and Henry Street (but it was so long ago and so much has changed). I left the house as usual and marched straight to the shop, went to the Cornflakes, reached up for a packet and marched out. On the street there was a shout, I was pursued and overtaken by one of the shop ladies and was taken home to face a terribly embarrassed mother.  She paid for that box and I was left in no doubt that I was never to try anything like that again. When the heat had died down I made the mistake of asking if I could extract the figure. It was a long time before I saw that particular member of Robin Hood’s band.

From Ash Street to Jubilee Road

My time in Ash Street was brief, just a few short years, but it has left some sharp memories.  The memories have been filled out by stories passed down in the family, like the ride on the colliery train and the time I was the youngest thief in the North-east.  My brother was born and we were re-housed in a council flat in Jubilee Road. I have many more memories of that time in the later 1950s but those of Ash Street are precious.  Not long after we left the street and the area around was demolished, so readers scratching their heads over where it is will never find it! On my recent return visits I find offices, new roads, a leisure centre, a theatre and a Metro station, somewhere among these buildings are the ghosts of Ash Street and its people. ©Jack Harland

Jack Harland grew up in Coxlodge in the 50s and 60s. He was born in an upstairs bedroom of a colliery house on West Street, (now Kenton Road) in the middle of a snowstorm. In later years Jack’s career took him north to Scotland where he developed a love of hillwalking and mountain climbing. This love of the outdoors led to the publication of his three books, beginning with Highland Journal – The Making Of A Hillwalker Highland Journal series brings together Jack’s skills as an artist and writer. We are delighted to have been able to share Jack’s memories with you on the Discovering Heritage blog.

Discoveringheritage.com offers a range of heritage and research services. You are welcome to find out more by visiting the Little Histories Shop on Etsy

5 thoughts on “Lost Streets Of Gosforth”