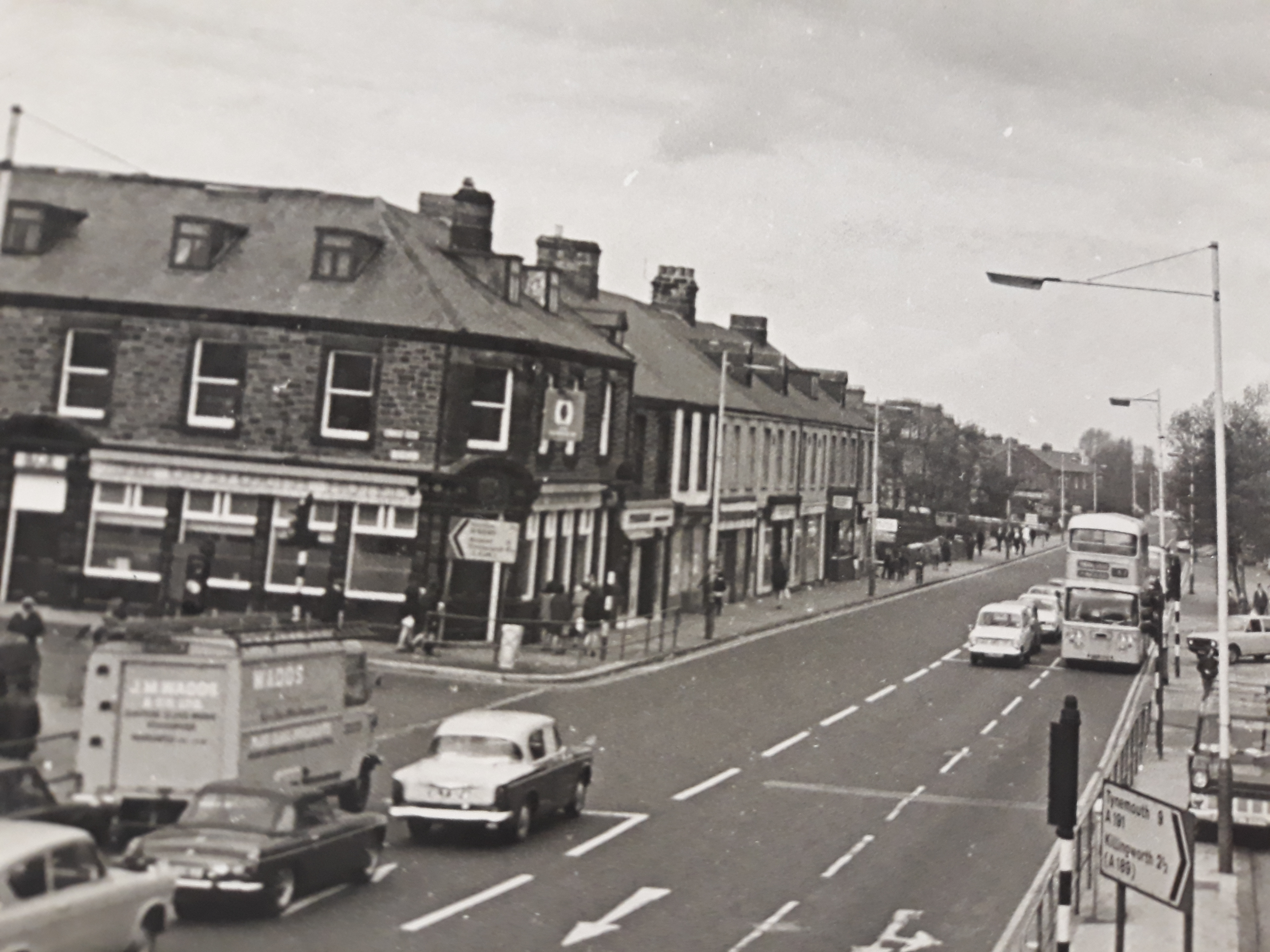 Those of us who grew up in Gosforth during the ’70s may remember the newsagent T Punshon Ltd. The shop was situated at 207 High Street opposite the Royalty Cinema and the old Gosforth Fire Station. After a Saturday daytime viewing at the cinema, hoards of children used to rush into Punshon to buy sweets. They were marshalled into the shop (in small groups) by long time and much-loved shop assistant Betty Grigg. Betty may be remembered for her cheerful disposition and always wearing her black hair in a bun.

At that time the owner of the shop was Mr Harland. Mr Harland bought the newsagent business around 1962 from a man called Bill Busby. By the time he retired Mr Harland had owned 4 Newsagents in Gosforth. T Punshon Ltd at 207 and 84 Gosforth High Street, Potts Newsagent at 147 Salters Road and Gosforth Shopping Centre at 1 Henry Street.

So why were these shops not called Harland after their owner?

We discovered that owing to the excellent reputation of T. Punshon newsagent, upon his purchase of the business, Mr Harland decided to keep the original trading name.  The shop at 84 High Street also became known as T Punshon whilst the other two Gosforth shops kept their original names.

Who Was Mr Punshon the Gosforth Newsagent with the excellent reputation?

Research found a record of Thomas Punshon in the 1911 census. Here his occupation is recorded as a wholesale newsagent. He is 58 years of age and living in Fenham. Living with him are his wife ( Margaret) and four children. (John, Jessie, Eliza and Donald).

As we follow Thomas through the early 1900s, we discover that by 1919 the Trade Directories record T Punshon newsagent trading from 207 High Street in Gosforth. However, plans for a new lavatory and WC submitted a year earlier suggest that Thomas was trading from 207 High Street in 1918.  At this point, Thomas lived in Harley Terrace Gosforth aged as 66. Thomas moved house twice more, to 61 Rothwell Road and then to 9 Rothwell Road.

The 1922 Trade Directories suggest that Gosforth High Street supported a thriving business community. There were two other newsagents, no less than 11 confectioners including Tilley & Co Ltd. two tobacconists and Moods Stationers at no 153. There were two fishmongers including Lilburn, two milners, J Farnon Drapers at 52 and a Cycle Maker at number 61.  The Post Office was at 109 and the Telephone Exchange at no 81.

Thomas and Margaret had another son. Thomas James  Punshon was born in 1886. Sadly Margaret Punshon died in 1928. She left her youngest son recorded as incapacitated and her husband Thomas living at 9 Rothwell Road.`

As we follow Thomas’s life into his later years, we learn that at the age of 77  he re-married. In 1930 Thomas married Mary Trewhitt. The 1939 England and Wales register records T Punshon as a retired newsagent living at 9 Rothwell road with Mary carrying out unpaid domestic duties living with one son who was incapacitated.

Searching the births marriages and death notices in the local paper archives we found that Thomas Pushon died on 8 February 1940. One year later almost to the day on 18 February 1941 his son Thomas James also died. This left Mary living alone at 9 Rothwell road. She was 65 years old. Thomas senior’s effects were £8,055 6s 2d. Mary Punshon continued to live at this address until just before her death in 1960 she was 83 years old.

By the time he retired Mr Harland had sold all the shops individually. The shop at 207 High Street is now the Gosforth Flame, 84 High Street is Adrianos Dei, 147 Salters Road is now Canny Crafty and the Gosforth Shopping Centre at 1 Henry Street is Alpha Male Grooming. Research of planning applications show between 1964-65 considerable alterations were made to the premises. A new sign was added in 1964 followed by a change of use of the flat above the shop to a store room plus alterations to the back shop. This may have been for extra security due to the high value of cigarette and tobacco stock. The shop front was also altered from the traditional store front to the aluminium frontage still in situ today.

During the 1980s the shops (in particular 1 Henry Street) were targeted by “ram raiders”. The raiders drove their vehicles through the plate glass windows into the shop and cleared the cigarette display gantries. These crimes took minutes to commit with the offenders getting away with thousands of pounds worth of merchandise. The response to these crimes was to install metal shutters mostly of which are also still in situ today.

Victor Michael Harland was passionate about small businesses and became a Director of Bridewell on 15 Oct 1991. Bridewell was a buying consortium specialising in the supply of confectionery, tobacco, and newsagents sundries. He retired 1 July 2000 ©Discovering Heritage.

Discovering Heritage are a team of specialist historical researchers with expertise in researching local and residential history.

Add your chapter to the story of your house!

According to UNESCO: “Heritage is our legacy from the past, what we live with today, and what we pass on to future generations. Our cultural and natural heritage are both irreplaceable sources of life and inspiration.”

Let’s document it then!

“Very professional service ,quickly and thoroughly done, Many thanks for your efficient input.”