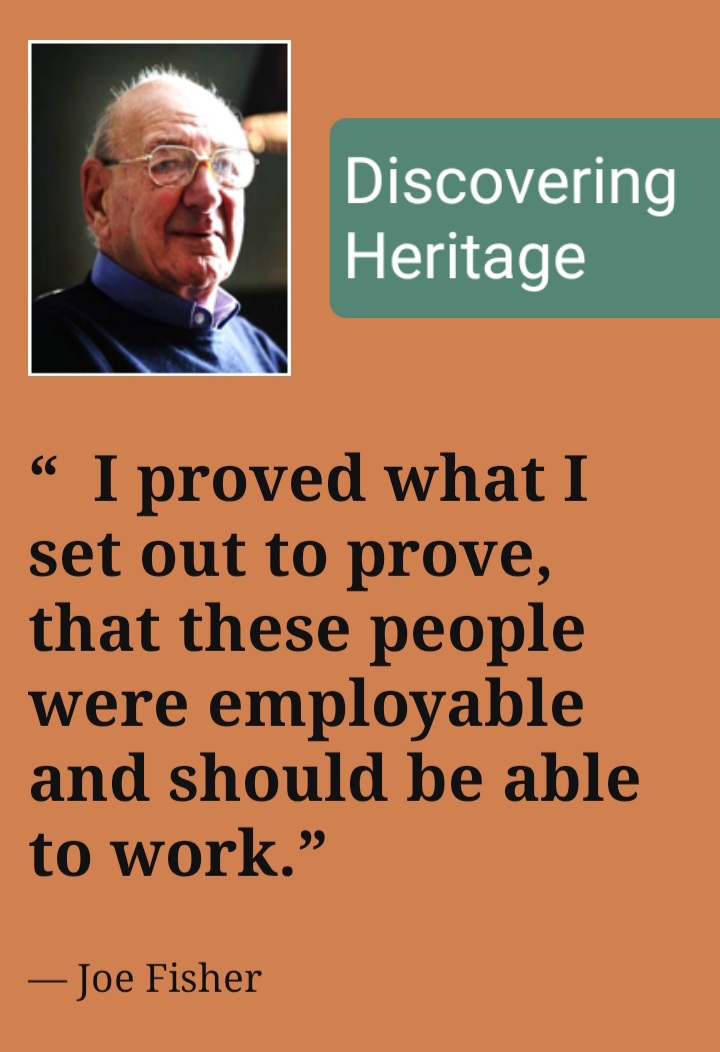 A story of Polish/Russian/Dutch Ashkenazi Jewish migrants who were Jewellers and Pawnbrokers,, and owned the Lyktan retail shop on Gosforth High Street.

When we received this message from David Wardell we knew straight away that this was going to be a brilliant story! In contrast to many of our other posts this latest research from David looks at the life of Joe Fisher who at the age of 98 lives in Gosforth.

“In a nutshell it is about Joseph Fisher a Jesmond / Gosforth man who contracted polio in the army out in Burma in WWII and was seriously disabled but pressed on regardless with his life and helping others like himself. Son of a family of Jewish immigrants (mid Victorian) pawnbrokers / jewellers  in North Shields and and wholesale jewellers later in Newcastle. He founded a hostel / training centre for polio victims in Newcastle. Married a Swede and opened a shop in Gosforth selling Swedish wares.  Successfully Transferred the business to Newcastle. “

We are sharing this story in two parts, the second part will trace the family history back to the mid 1800’s.

The son of  Jacques Fisher and Sybil Jacobs Joe was born in 1922 in Newcastle.  He spent most of his years as a resident of Jesmond and Gosforth.   His father was a director of the family wholesale jewellery business in Newcastle. Between 1930 and 1936 Joe attended  the Royal Grammar School in Newcastle for his secondary education. Joe still lives in Gosforth now at the age of 98.

Joseph has fond memories of the Royal Grammar School . “ My house was Horsley (blue). All the Jewish boys were herded during morning prayers into AW ‘Buggy’ corner of the Hall, only to be released in time for Assembly.

It was segregation of the worst kind. Would we all have collapsed if we had heard the word Christ? Mr Herdman whose room  was on the first floor most easterly corner, informed me that I spoke French with an Osborne Road accent! I recall running around the perimeter of the school playing field on a cold and wet winter afternoon…… was this PE or punishment? “

World War II broke out on 1 September 1939 and at some point thereafter Joe joined the Army spending time out in Burma. In 1946 after the end of the war he was sent back to England having contracted polio out East. The war had ended and Joe, just 23, was left paralysed down one side,  living in London, and not certain if he would ever be able to work again.

Determined not to let his condition get the better of  him, after 2-3 months of hard struggle, Joe gained work in a London Hotel.  He started going to meetings with the Infantile Paralysis Fellowship in London and became aware of how fortunate he was to have a supportive family and not be short of money. With continued ill health , Joe soon decided on a return home to Newcastle, where he was able to work in his family’s wholesale jewellery company .

Believing that people with Polio could and should work, Joe then began devoting his life to helping Polio sufferers start working again,  boosting their self-esteem and enabling them to earn a living.  After moving back to Newcastle, the Infantile Paralysis Fellowship asked Joe to organise  a branch in the North East. Thus began a 60 year’s partnership in which he was able to help change the lives of many Polio sufferers.

The British Polio Fellowship was founded in January 1939 originally as the “Infantile Paralysis Fellowship” . This original name for the organization reflecting the medical name used to define this pathological condition at the time. The prime aims of the new Fellowship were to bring together people who had been disabled by polio, their families, friends, and supporters, and to do all that was possible to assist people in improving their lives in the face of their disability.

A new Trust Deed was adopted on 17th April 1953 which, essentially, remains in force today. The 1953 Trust Deed appointed four trustees one of whom, Joe Fisher, is still active with the Fellowship today and was the founder of the Newcastle employment project

Starting in 1954 with a large donation of £13,000 from the Newcastle University Students Rag Appeal Joe Fisher obtained a house in Jesmond, Woodlands Mews ,  which was converted to provide a hostel and a centre for training.  Help was provided here for up to 20 polio victims at a time.  Where possible they were taught a trade and enabled to gain employment and earn their own living, from which they were asked to contribute towards their upkeep, living in this large house together. They thus gained a feeling of usefulness and increased personal esteem.

“…. a lot of people were far less fortunate than me and couldn’t make much of a life for themselves or earn a living, but I felt that just because they couldn’t walk very well didn’t mean they couldn’t do something with their hands and their brains.   I wanted them to feel they were taking part. Very often, just a bit of TLC and understanding does wonders. Simple adaptations can make a huge difference to disabled people.”

“We brought people from all over to live at our purpose-built hostel with the intention of teaching them a trade. It was carrying on what I had always believed which is that these people were employable”

1954  Joe Fisher took a holiday trip to Sweden where he met Inga Olofsson and in the following year they were married. Inga already had a young son, Max,  by her previous husband and over the next few years Joe and Inga had 3 more children, 2 boys and a girl.   Simon, Sigrid and Martin.

Joseph Fisher and his new Swedish wife Inga , decided to set up a retail business in Gosforth selling contemporary Swedish and Scandinavian glass, ceramics, jewellery and fancy goods. Thus ‘Lyktan’ was born at 59b, High Street in Gosforth occupying the shop which is now  the right hand half of Katherines Florists Shop. Here they also lowered the ceiling for better effect and this can still be seen today in the flower shop.

LYKTAN IS THE SWEDISH WORD FOR A LIGHT OR A LANTERN

In 1961 as the business prospered Joe and Inga decided to move their shop to the city, at 96, Grey Street on the corner of  Shakespeare Street, to much more spacious and prestigious premises. which many older residents may recall.  The shop  was on the opposite corner to the old Theatre Royal Box Office.

At some time hereafter Joe and Inga went their separate ways and in 1974  Joseph  married again to – Christine V Swinhoe.

for services to charity and the British Polio Fellowship, having worked tirelessly to change perceptions of disabled people in the North East, masterminding a Polio hostel and training centre in Jesmond in 1954.

ORDER OF THE BRITISH EMPIRE, CIVIL

For services to Charity especially the British Polio Fellowship. (Newcastle upon Tyne,

“  I proved what I set out to prove, that these people were employable  and should be able to work.”

Joe was a third generation of the Fisher family in England. Still living in Gosforth at age 98 Joe now suffers from Post-Polio Syndrome, a hangover from the disease which causes of polio sufferer’s health to deteriorate in later life. His family story stretches well back in to the mid 1800’s. ©David Wardell