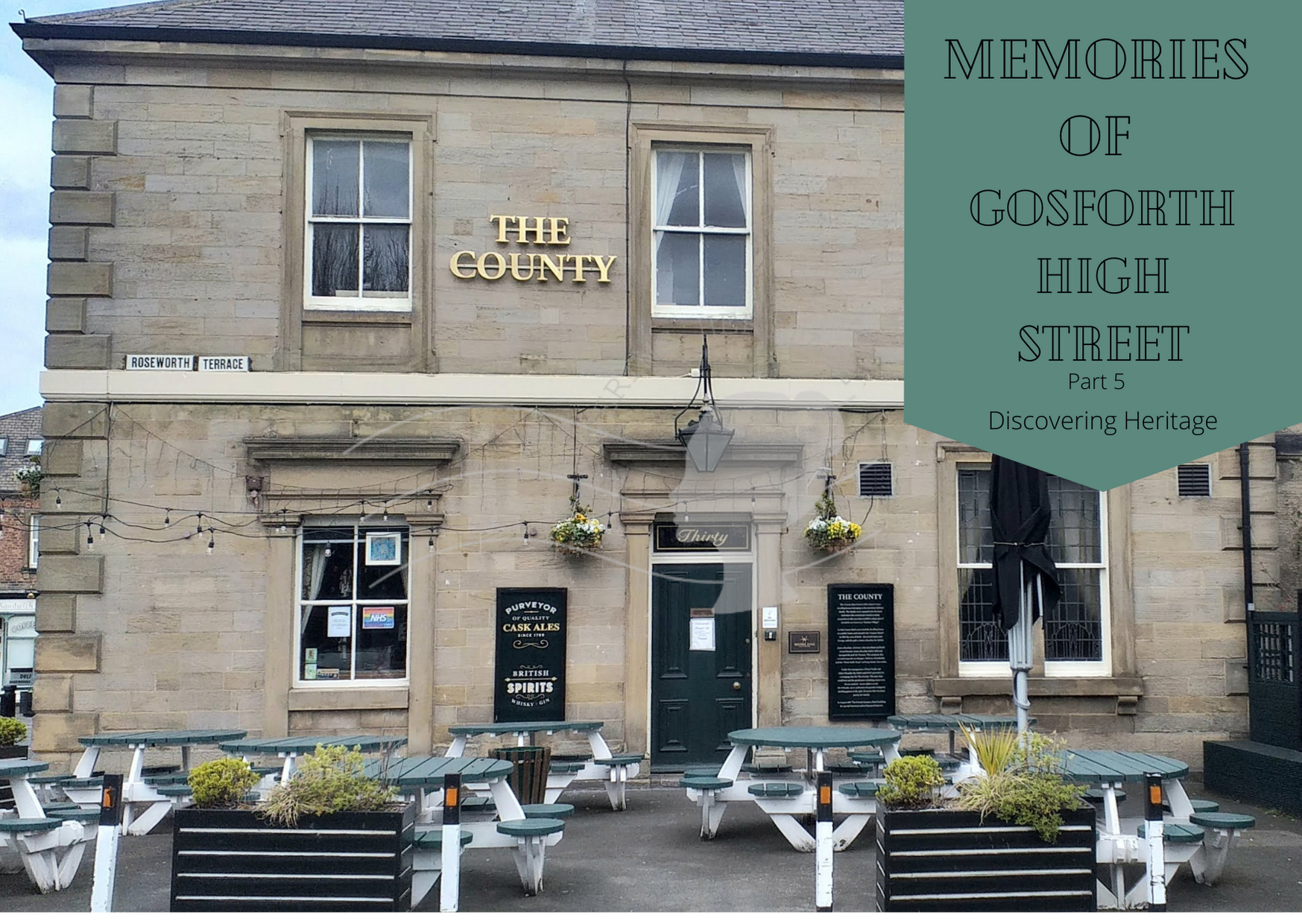 Discovering Heritage are a team of specialist historical researchers with expertise in researching local history and residential history. As part of our community outreach we share some of our research and invite guests to post on our blog.

Welcome to the fifth and final part of David’s Memories of Gosforth High Street. We would like to thank David for sharing his research with us so we can in turn share it with you. Like you we have enjoyed reading his posts and have looked forward immensely to sharing them; we can appreciate the hours of work that have been spent bringing this collection together! We invite you to share any of our posts with relevant sites (share buttons are located in the footer) and would urge the practice of including a credit to the author/site and links where appropriate.

We begin where we left off in David’s last post at Brough’s.

Walking past Brough’s there was a low wall with a small garden where the Colliery Offices were housed in Hanover House,  which was set back from the High Street. Another coal merchant’s I believe. This now brings us to a small lane and the Old Lloyds Bank with its mahogany counters behind where the tellers would sit without all the modern glass screens and security that we know of today. (Now rebuilt as part of the Gosforth Centre).

The side lane snaked round behind the bank in to St. Nicholas’ Avenue across the side of H.G.Robinsons Motor Dealer’s Showroom who had their premises extending right back to the gates of the Central Park, on two levels, selling Volkswagen cars. Crossing St. Nicholas’ Avenue we reach Sculpher’s shoe shop later to be Peter Lord  and  Clarks Shoes  and until recently Thomas Cook Travel. As kids we loved coming here for our new shoes. Our parents being chiropodists insisted on well fitting quality shoes which usually indicated Clark’s. Of course what could be better than watching your feet in the X ray machine. Quite a novelty for kids in those days looking down at the bones of your feet inside the shoes displayed in beautiful green colour.  The current Thomas Cook shop has now closed.

Next door we find the Electricity Company (now Oxfam) and then the Gas Board showrooms. This latter shop was later subsumed in to Thorpe’s Hardware & Ironmongery  who were just one shop further along.  Thorpe’s (1947) is one of the longest established family businesses remaining on the High Street although taken in to different ownership in the last couple of years,  it still remains much the same. ’If it ain’t broke don’t fix it ‘ as they say.

Like many shops of this ilk they used to repair the old valve radios as well. The original shop was quite small by current standards but was doubled in width and opened up towards the rear to develop the shop as it is today. I can recall my father, being somewhat distrustful , marking with a pencil all the valves in a radio set when he took it for repair. Radio repair shops were renowned for charging for new valves that they claimed to have replaced…but hadn’t done so.  Whether this was actually a fact or just a general belief I’m not really sure. Next door to Thorpes was Tilley’s The Baker’s who also had a small café / restaurant business up above. Carrick’s Baker’s  later moved here from the corner of Hawthorn Road, but this is now TUI Travel (recently closed.).  Moving on beyond Carrick’s we reach Harton Cleaners later   Johnson Dry Cleaners. I am convinced that this was once Whites of Jesmond for a time. A cheese monger who previously had a shop opposite on the High St. However I can find no evidence of this in records. Then came the Coal Board Office next to Woolworth’s which was later Berry’s Hairdressers.  We’ve now reached Woolworths. One of the largest shops at that time and housed in what were possibly premises specially built for them around 1941 when they first appear in the phonebooks but probably built pre war.

Woolworth’s had large low counters staffed commonly by young girls who would no doubt come as cheap labour.  A vast miscellaneous range of goods could be found here as well as some basic canned foods at the back of the shop. Later renowned for their pic-and-mix sweets the shop had low counters that were a temptation to young children and I can remember that some were severely admonished or even expelled from school for shoplifting.

Lots of inexpensive items and toys could be obtained here. Very popular were the Airfix model aeroplane kits which could become a nightmare to put together, as parts were not always accurately made and their fit was sometimes awkward. Most kids ended up with hands covered in aeroplane glue with its strong smell of acetone.  Woolworths also stocked yet a further ice cream brand, Midland Counties. Did we really eat that much ice cream in those days  I wonder!    Especially when money was tighter.  Their ice cream was not rectangular like others, but came as a small cylinder of ice cream enclosed in a circle of cardboard. When unwrapped this fitted very nicely in to a circular cornet, it just needed a firm push to get it to stick in place often resulting in splitting the cornet..

After Woolworth’s came Archie Mclean Brown’s , an Electricians shop. He was followed here by Anthony Donald’s, The Rocket Shop, which evolved in to The 2 W’s (menswear)  and later became Greenwoods Menswear and it is now Flowercraft . I lived opposite Anthony Donald and his wife at that time so knew their family quite well..

These shops from this point to the County Pub were single storey premises,  behind which lay some earlier large houses.

These houses were Roxburghe House North , Roxburghe House South , Gosforth Villa and Thornfield . The two in bold type were demolished in the 70’s to make way for the car park. Roxburgh House North was reached by an arched wrought iron gateway just after Archie Mclean Brown’s shop and was the dental surgery of Spence and Hutchinson, and my dentist. I recall going here for some extractions with gas when I was about seven, the anesthetist suffered from total alopecia (lack of any hair), wore a rather obvious ginger wig and was endowed with a cleft lip and palate rendering his speech somewhat difficult to follow. For a small child it was rather frightening but he was actually a very nice person who I encountered again in later years at University. The surgery is now Adriano’s Italian Restaurant and next door but one on the corner of the back lane that now leads to the car park was the L & N grocery store later to become  Punshon’s Newsagents and  then Johns News, followed by  AM News and  it’s now Adriano’s Delicatessen.   Across the back lane here we reach the Hadrian Supply Co., yet another grocer’s,  later becoming The Maypole Grocers  and then D& P Photographic.    On the end of this block of shops was  Swinton-Wood the photographers and today a Chinese take away restaurant.

We have now reached The County Pub. All the property beyond here is residential, the first one containing the building that was the Old Gosforth Jail many moons ago and one commemorating Merz and McClellan, the last being on  The Grove with the Doctor’s surgery on the corner and Midland Bank on the opposite corner in it’s own purpose built premises. Now yet another an Estate Agent.

The only remaining premises to mention here was The Grove Garage owned by James Woodhall who also ran the Laundrette at the North West end of the High Street just before Landsdowne Terrace West , and now Pizza Hut..

The Grove Garage had stood there since being built in 1925 for Detchon and Fletcher as the Westfield Garage.  In my childhood days it was an old fashioned garage that serviced and repaired motor vehicles having a hydraulic hoist inside to raise them up for inspection.  Before it was later remodelled,  the whole site was completely enclosed with it’s walls extending back totally to the lane at the rear of Roseworth Avenue.  At the front,  on the High Street there was a small drive in forecourt with several different branded petrol pumps and a further two pumps at the garage side entrance. Within this forecourt was a tiny showroom that held just one or two second hand cars for sale. For such a small garage it was surprising how many types of petrol they sold with Esso, National Benzole, BP, Power, Cleveland, Shell all being represented and probably all supplied from same two basic storage tanks. Other second hand cars were often displayed on the open forecourt on Roseworth Avenue. Mechanics Eric andFred became well known to us kids & later also Arthur who subsequently moved to Dinnington, Autotune Garage.

The Garage changed hand’s in 1975/76 and was renamed The Dukesmoor Garage (coupled with a Garage of the same name on Kenton Rd) and was converted to an open sided drive through filling station.  It has since been rebuilt, retaining the original façade, which I believe is listed , and was a branch of Carphone Warehouse until 2018 when it closed and ultimately re-opened as a solicitor’s office in 2019.

Older residents in Gosforth have recalled going upstairs at the garage to watch silent movies projected onto a white sheet in the storage area of the premises. Apparently one of the first places to show moving pictures in the area as mentioned in the local brochure depicted here.

Beyond the garage are  residential properties, however at the Southernmost end I cannot leave out the Sunday Papers Seller.   Each Sunday a local man, Mr. Bohill, a jobbing plumber I seem to recall called Tom, would set up his newspaper stall in the small seating area outside the garden wall belonging to the last house on the High Street [i.e. South Court]. He would arrive each Sunday, quite early, with his ‘gear’ on a barrow (in later years in his car), and would offload several large wooden boxes, probably orange boxes, some poles, canvas sheets and some rope which he then turned in to a stall with his boxes arranged like a series of pigeon holes on the park bench that was provided there. He would then create a tented cover over this stall and await the arrival of the newspaper delivery that he had ordered. Very many of the local people and quite a few passing motorists would buy their Sunday papers from Mr. Bohill who stood on this corner for a great many years.

We have now reached the very end of our return journey along the Village.

This work is copyright and may not be reproduced in part or in whole without permission of the author.  Many of the pictures and illustrations may be copyright elsewhere and should not be published anywhere without checking copyright details. ©David Wardell

Catch up with David’s journey through Gosforth High Street

Spot your street in 1920s Newcastle

Image its the 1920s! The end of WW1, shorter skirts for women, comics were published weekly, hand made furniture was the norm and not everyone had an indoor loo! Here is a chance to see if you can find your street in the 1920s.