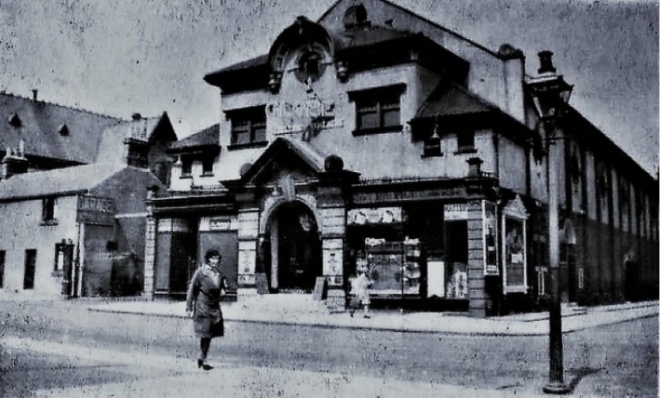 Many of you will remember with fondness the Royalty Cinema on Gosforth High Street. However, this was not the first cinema in Gosforth. The first cinema was The Globe, sometimes known at The Globe Electric Theatre – a building that still stands on Salters Road and is now occupied by the Gosforth Palace Chinese restaurant.

The Globe Cinema Fined For Overcrowding

The Globe Electric Theatre opened in 1910 having been built for Joseph Collins, the proprietor of the King’s Cinema in Marlborough Crescent, Newcastle and designed by J.J. Hill, architect. The cinema appears to have been designed in an opulent style with seating for over 800 patrons, and several private boxes. A billiard room was planned for the basement, but this did not feature in the final version of the plans. Cinema going in the early years was very popular, so much so that in 1912 and 1913 the manager of The Globe was fined for overcrowding. The cinema appears to have had a close association with The Sanderson Hospital – there are several newspaper reports of children from the hospital attending a ‘Children’s Treat’ at the cinema in the early years after opening.

On 22 February 1913, a dramatic incident took place at The Globe. The building has been hired out as a venue for a meeting of The Gosforth and Coxlodge Liberal Association attended by Alexander Ure, M.P., Lord Advocate for Scotland. On the morning of the meeting, a hammerhead was thrown through a window in the entrance hall to the building with a label attached. The message on the label read “Let fresh air into politics by votes for women”. Residents of Salters Road reported hearing a car in the vicinity of the theatre between one and two o’clock in the morning. The perpetrator of the attack was not discovered but was believed to be a militant suffragist.

The damn’ , was d.serwered when the theatre was catered tIL , c .•r.iing. and it was then ascertained that a Ha:e-glass window in the entrance-hal of theatre. which was guarded by an h had been smashed. A hammer-head’s .4 been thrown through it. and the iound irside the deersay. The we’gned one pound. Tr the liammerhead was arached a lalwl which bon , the words: ” Let fresh air into politics by votes for women.

It would appear that the attack was carried out in the raw; hours of the morning. Residents in Salter’s Road say that between one and two o’clock they heard a motor-car in the vicinity of the theatre. Tb-e circumstance was unusual enough to ‘mike thin comment on it. A woman. rir:nit near to the theatre, stated that about 1.30..-::e heard a crash. as of broken plass, and got out of bed and looked out of the window, but there was no one to he area, The police were communicated with this morning. and they have taken possession of the missile with which the damage was done.

By 1915 the cinema had a new proprietor, Sidney Bamford who ran it for most of the period of silent films. The first ‘talkie – “Sunny Side Up” was shown on 28 April 1930.

In 1928 the Globe was taken over by the large national company General Theatres Corporation which in turn was shortly after taken over by Gaumont British. In 1935 the cinema was sold to E.J. Hinge, the owner of The Royalty cinema. For a time, both cinemas were able to continue operating by offering different programmes. The Globe finally closed as a cinema in November 1961 re-opening as a bingo hall which in turn closed in 1990. The building is the oldest surviving cinema building in Newcastle.

Discovering Heritage through the authentic historical research of people places and properties.

Our Gosforth and Jesmond blog posts aim to shine the spotlight on the rich heritage of these two areas of Newcastle. Recognising our local heritage is the first step in being able to protect and appreciate heritage for the future. We have been commissioned by individuals to carry out house histories. These histories are helping to highlight the lives of ordinary working people in the North East.

3 thoughts on “Militant Attack On The Globe Cinema Gosforth”