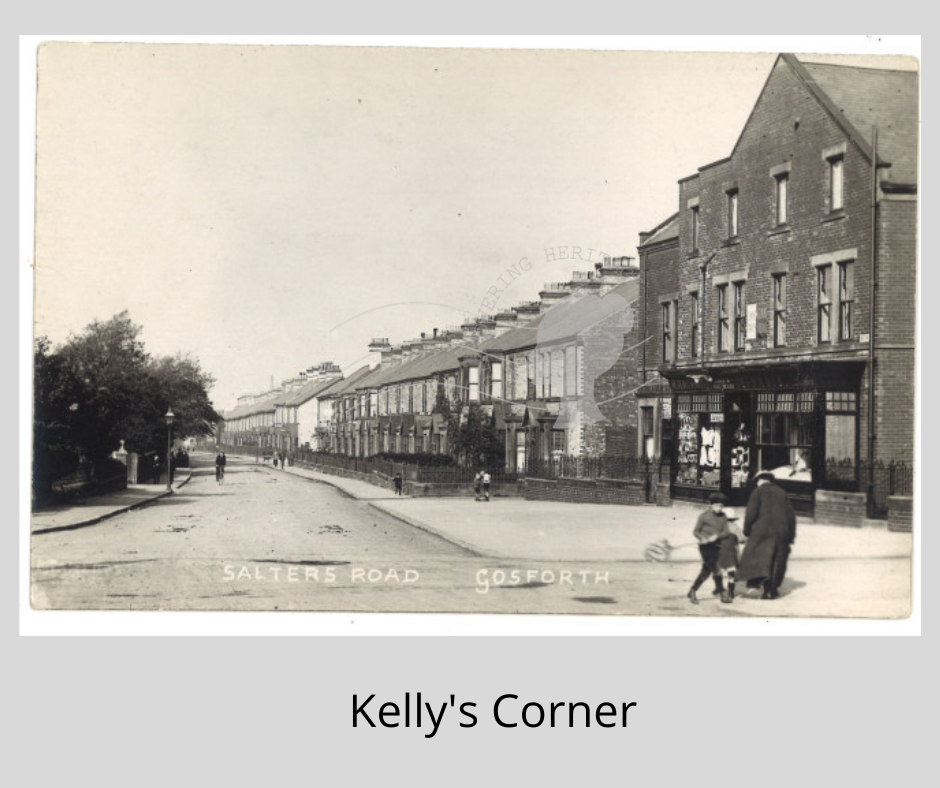 Where Was Kelly’s Corner?

History of a corner shop looks at the corner of Linden Road and Salters Road in Gosforth which became known locally as Kelly’s Corner. In 1922 A E Kelly began to trade as a tobacconist from the shop at 149, Salters Road. By 1925 Mr Kelly had moved next door to 147, Salters Road. Kelly’s newsagents went on to trade from this area for over 30 years. Gradually this area once known as the Shoulder of Mutton after the pub that used to stand on the site of  Dickinson Crescent gained a new identity, Kelly’s Corner.

The Shoulder of Mutton Inn

The demolition of the “fag end” cottages that stood on the site of 145-149 Salters Road and the Shoulder of Mutton Inn opposite cleared the way for new development in this corner of Gosforth.

In 1903 plans were submitted to GUDC for proposed residences on Linden Road. Proposals were for nine terraced houses on Linden Road, with two shops fronting onto Salters Road. The architects and surveyors were Ian Critchley of 16 Mayfield Road who drew up the plans for Messrs J & G Douglas. The first retailers from these new shops are recorded in the trade directories dated 1904  as H Moore dressmaker, T W Little grocer and W Guthrie confectioner. All three businesses are registered as trading from 147 Salters Road.

W Smith butchers were followed by E G Finlay butchers in 1910, W Stewart butchers in 1911/12 and by E Paris butchers in 1914. Careful inspection of the name above the shop in our photograph will reveal the name of E Paris Butcher. The 1911 census records Charles Paris as a butcher living with his wife Esther Paris. The couple are 40 and 42 years old respectively at this time, and they are living in Hyde Terrace with their sister in law, Florence who is an assistant schoolmistress. Further research shows that the couple lived into their sixties and spent their later years in Hyde Terrace. There is no mention of the Paris couple at 149 Salters Road after 1916.

The photograph also shows M A Russell Draper and General Dealer next door at 147 Salters Road. The Russells followed J Sitch general dealers into 147 in 1912. They ran their business from these premises for ten years or more departing c1923 -25. General dealers in early 1900s sold a wide variety of goods, as you can see by looking closely at the shop window in the photograph. The window display shows a variety of corsets and other undergarments while advertising Lyons Tea and Fry’s Chocolate! The signage on the bottom bay window of the house and between the first-floor windows is tantalising, as we have not been able to decipher the wording.

A E Kelly tobacconist followed Esther Paris into 149 Salters Road in 1922.  Later in 1925 when M A Russell moved out of no 147 Kelly’s tobacconist moved in. The 1939 England and Wales Register records A E Kelly living at 145 Salters Road (above the shop). Living with him are his wife Elizabeth Kelly,  carrying out unpaid domestic duties, Isabell Kelly also an unpaid domestic, John Kelly, who is at school, and Mary A Akrill a retired nurse.  The 1950 trade directory, records Albert Edward Kelly Newsagent trading form 147 Salters Road. At some point between 1953 and 1956, Mr Kelly retired, after over 30 years of trading at this address.

The local name of Kelly’s corner lived on in the memories of the next generation but was eventually forgotten like the Shoulder of Mutton before it. Today new niche businesses are moving into this little corner of Gosforth, and the area continues to develop, following a tradition of small business trade that began in 1904.

Next door at 149 the succession of butcher shops came to an end when R Hedley hairdresser moved in, during 1934, followed by I E Hanson Boot Repair. Hanson was the first of a succession of similar shops continuing through 1969 with G H Storey Shoe Repair.

Do You Wish You Could Discover The “Way Back When” Timeline Of Your House?

Contact us here to book your commission. You will receive your bespoke stamp on history, document your place in the story of your house or impart the perfect gift!

“Blown away by how good it is. Best find all year, such unique gifts. So well presented and wrapped. Made with love and care. You won’t regret ordering.” Etsy customer review

Grab this offer and take 10% from your first order by subscribing to the Discovering Heritage news feed. We will knock 10% off your first order for anyone who signs up! Products must be paid for up front to claim this offer. This offer will run until December 31 2021.

4 thoughts on “History of a Corner Shop”