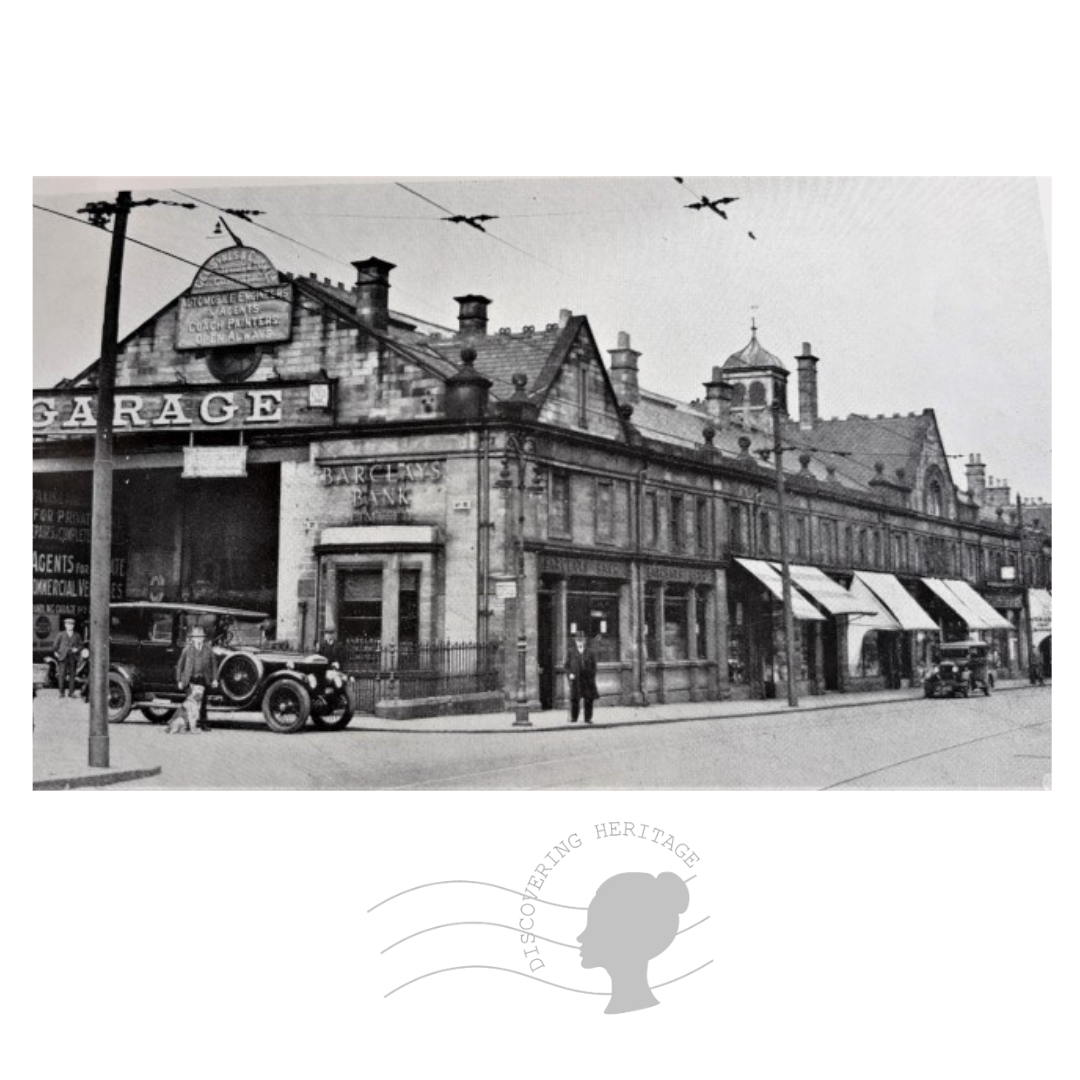 A look Back at Gosforth High Street

Taken outside the Gosforth Tramway building this photograph shows the G Sykes and Cook garage c1930s. The garage was one of a number of businesses that traded from the old tramway stables on Gosforth High Street.

The tramway service came after the Gosforth omnibus started by Mark Frater. In this post we look at this building between the years of 1884 to 1973. The tramway stables was one of the longest buildings on Gosforth High Street running from Ivy Road almost to Woodbine Road.

The Newcastle Upon Tyne Corporation Tramways opened 5th December 1878 at this time the trams were horse drawn. In 1885 the operator name changed to the Newcastle Tramway Company. This was a company formed by Daniel Busby and William Turton to run the tram services. By 1888 the company had changed its name again to become the Newcastle and Gosforth Tramway and Carriage Company, with William Turton listed as the director. (Note the names of Busby & Turton appear on the plans).

Plans were submitted to GUDC by Busby and Turton in 1884 for the building of new tramway stables in Gosforth. They included 3 rows of stalls enough room for 116 horses, between which ran the car shed. There were also two manure stores, a harness room, a sawdust room, a smithy, 2 loose boxes (one of which later became Barclays Bank) and a car pit. The last horse drawn tram service was on 13th April 1901.

By 16th December 1901 the first electric tram service was underway, the route was 51.27 miles long. The Tyneside Tramways and Tramroads Company was chaired by John Theodore Merz who was also a director of the Swan Electric Light Company. As a point of further interest Charles Hesterman Merz was the eldest son of John Merz. Charles Merz lived in the house that today stands at no 54 Gosforth High Street and was originally shown on maps as Gosforth Villas. Charles Merz became well known for his involvement in the electrification of the railways in the early 1900s. In 1899 he set up a consultancy firm and from 1902 worked with William McLellan. The company became known as Merz and McLellan. The electric tram service ran for 49 years and closed on 4th March 1950.

The first reference we have come across to this premises being used as a garage in the trade directories is in 1925 when G Cook Motor Garage is listed as trading on Ivy Road. The fact that this is 25 years before the eventual closure of the Newcastle and Gosforth Tramways Co. suggests that parts of the building may have been rented out while the Gosforth trams were still in use.

The photograph shows an image of Gee Sykes and Cook garage situated on the corner of Ivy Road and Gosforth High Street. Although the second line is illegible we can make out the wording Gee Sykes & Cook Ltd on the sign at the top of the building, followed by Gosforth then Automobile Engineers & Agents, Coach Painters, Open Always.

We have been able to date this photo to after 1937 by looking through the building plans register. After starting as F Gee, we see later plans presented in 1926, by Gee and Sykes Garage and then in 1937 plans were submitted by F Gee Sykes and Cook for alterations/extension to the office for Brandling Garage, Ivy Road. The table below records various planning alterations applied for between 1911 and 1954.

The words Brandling Garage appear above a smaller sign for Tyre Services.

Next door the dark blinds are partially pulled down over the upper bay window and the words Barclays Bank Limited can just be made out on the lower window and outer signage.

What followed the Gosforth Motor Company? We think we can remember Liptons and Kwiksave. We would love to hear what you remember!

Our Little Histories Shop offers a range of gifts designed to enhance the experience of living in your house! Discovering, sharing and re-telling stories is one of our oldest traditions. Find out more in our Etsy store!